There was glamour, magic, fame and stardom in the air at the BRIT Awards last week, as stars adorned the red carpet dressed head to toe in couture. However, the must-have accessory of the night wasn’t a pair of statement earrings or the latest Mulberry bag, but a single white rose. Why…? Well, in-line with the recent #TIMESUP movement across the pond in Hollywood, those in the limelight have been letting the world know that enough is enough when it comes to harassment and misconduct within the entertainment industry.

Of course, it goes without saying that it’s not just the stars amongst us that are affected by sexism, at the very least, and systematic sexual abuse at worst, within the structures of the workplace. As singer Paloma Faith said on the red carpet: “What I think is really important is that we’re speaking across the board for women, because I have never met a woman who hasn’t experienced it in any profession.” This movement is really prominent at the moment, and though it’s being led by those in the limelight, there’s a real sense that these spokespeople are using their platform to provide empowerment to women of all professions and walks of life.

Far closer to home than Hollywood, or even the BRITS, Birmingham as a city is a thriving vessel for female energy, success and creativity. Our streets are adorned with female CEOs, fire fighters, journalists, athletes, surgeons and students, and the city continues to elevate its women and girls to new highs every day; playing host to everything from women’s networking groups and safe spaces, to celebratory festivals and charities for vulnerable women. Through providing support and space for women to thrive in multiple sectors, our city is electric with girl power.

Women are dominating the worlds of finance, communications, law, and pretty much anything you can think of, and Birmingham is making it easier for these women to connect with each other and share the highs and lows that come with being female in a world that was not too long ago saturated with men.

Of course, it’s no lie that without some aspect of privilege and support, it can be difficult for many women to get into the corporate world, and this is further enforced by the fact that Birmingham has a 6% female unemployment rate; 4% higher than the national average. However, not only does Birmingham provide an incredible support system for women already thriving in their careers, the city recognises where it needs to pick up the slack and provide equal opportunity for a woman from all backgrounds.

One charity doing exactly that is Smart Works Birmingham. Set up in the summer of 2016, it has already gone above and beyond in its first year and a half in order to help underprivileged women get back into the world of work. To tackle the issue head-on, Smart Works provides women with one-to-one interview preparation via highly skilled, fully-trained volunteers. Alongside this, the charity helps to style the women with an outfit that is theirs to keep, so that they can feel confident when walking in to job interviews.

The charity is already off to a great start in its second year, having been voted as LoveBrum’s first cause of the year to support. Voted for by LoveBrum members, which includes professionals from the corporate sector as well as residents from communities helped by the charity, Smart Works Birmingham has received £2,000 to continue its all-important work supporting the city’s diverse female population.

Speaking about the donation from LoveBrum, which is a charity dedicated to uncovering the city’s hidden gem projects that help make the city an even better place to live, Smart Works Birmingham manager, Joanne Penn-Crossland, said:

“We were thrilled to have received this incredible grant from LoveBrum, especially considering that the theme for the month was ‘Self-improvement.’ Whilst we work tirelessly to ensure that women can improve their lives by getting their feet firmly on the career ladder, there is also an underlying sense of determination to improve each woman’s confidence, along with her own opinions of herself. If we can help each at Smart Works to find a little more faith in herself, then we know we’re doing the best job we can.”

Launched in August 2016, Smart Works Birmingham is open to any woman in Birmingham who has confirmed a job interview or year-long apprenticeship. Working with key agencies, women are referred to the Smart Works team of trained volunteers to take part in a two-hour dressing and interview coaching service. At the end of their appointment, women leave with a work-ready outfit donated by a leading retail brand, such as Hobbs, Whistles and Evans. 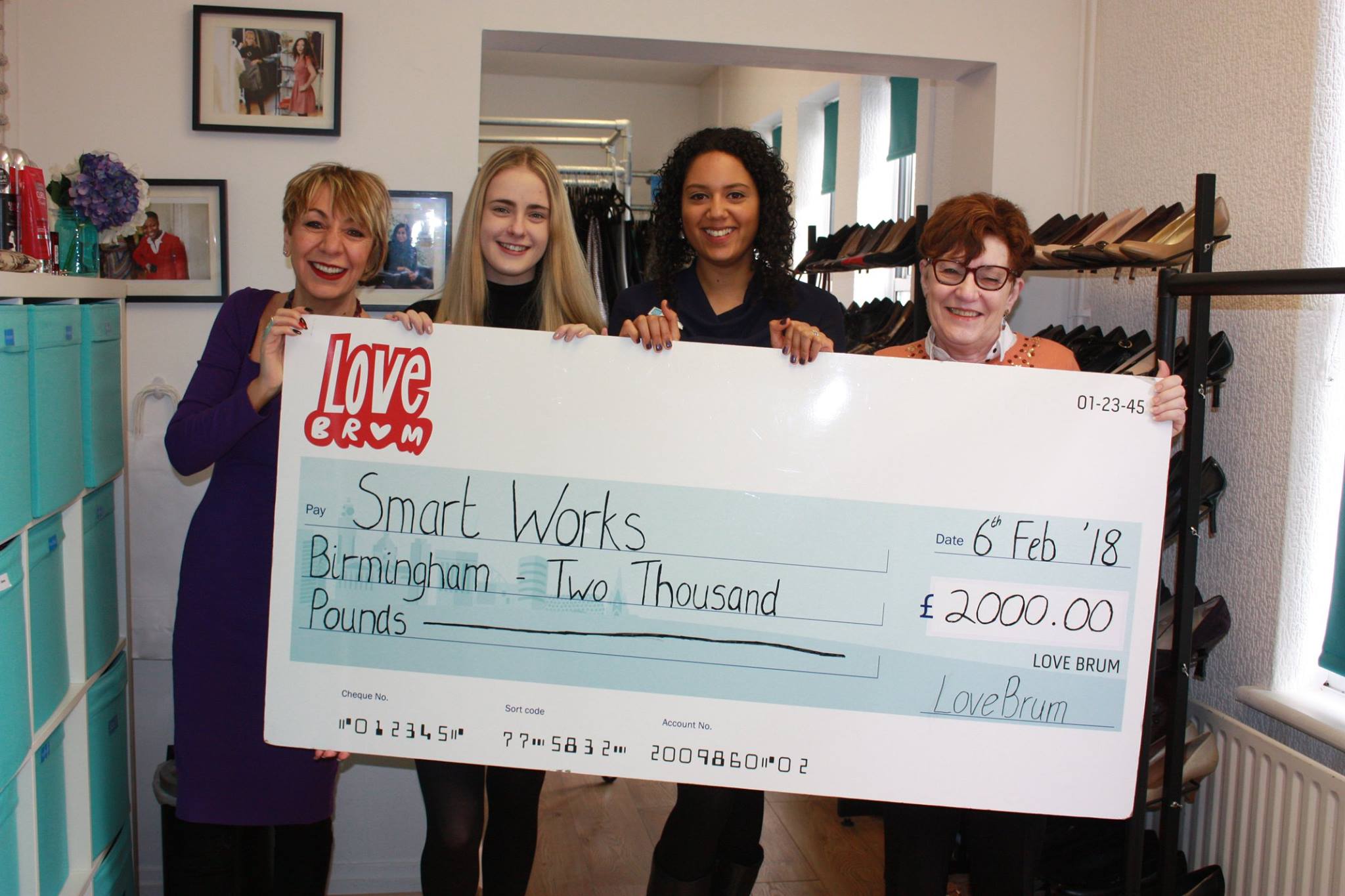 For all media enquiries, please contact Ella Cunningham at EAST VILLAGE. on 0121 227 4696, or alternatively by email: ella@eastvillageagency.com.