LoveBrum’s individual members, patron and corporate members, ambassadors, fundraisers and volunteers all support the charity’s mission to help make Birmingham even better. Some are passionate enough to take on all these activities, helping in any way they can to spread the word about LoveBrum and encourage the community to get involved.

Kirsty Siviter, Head of Business Development & Marketing at Barker Brettell, one of LoveBrum’s incredible corporate members, first became involved with LoveBrum when she signed up to join LoveBrum’s half marathon team in 2018 and, since then, has gone above and beyond to show that she’s proud of Birmingham and to support LoveBrum.

Find out why Kirsty loves Brum…

What’s your background and where are you based?

I am a Brummie, born and raised! I grew up in Erdington, and now live in Boldmere where there’s a great sense of community – there’s always something going on. Growing up, I was fascinated by the big city and wanted to be part of the action. I spent many years working for law firms in the city centre and I’m now the Head of Business Development & Marketing at Barker Brettell, a firm of Intellectual Property specialists based in Edgbaston. We work with clients in the West Midlands, across the UK and internationally, so our central location really works for us.

Why do you love Brum?

What’s not to love about Brum? Birmingham has so much to offer: beautiful parks; some seriously good shopping; a fabulous range of independent bars and restaurants; Peaky Blinders – need I say more? We’ve got plenty of sport going on: football; cricket; athletics and of course we’ll be hosting the Commonwealth Games in 2022, which will have a huge economic impact on the region. Big sporting events like this, the ICC Cricket World Cup and the British Athletics Indoor Championship help put Birmingham firmly on the map. Birmingham also knows how to throw a party! I was lucky enough to join the team of LoveBrum volunteers at the Mostly Jazz, Funk and Soul Festival in July. It was a fantastic day out and can’t wait to go again next year. 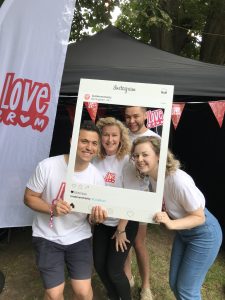 It’s fair to say that in the past Birmingham might have felt overlooked. We Brummies aren’t great at biggin’ ourselves up! But all that is changing. It’s impossible to ignore the sense of opportunity in the city. There’s so much regeneration and improved infrastructure which means more investment and jobs!

I’ve always been a proud Brummie so it’s brilliant that we have so much to talk about right now. And I can’t help but smile when I hear a Brummie accent. Alright bab?

Why did you choose to join LoveBrum’s Causes Committee?

I first got involved with LoveBrum last year when I joined the team of runners taking part in the Birmingham Half Marathon. As I got to know the charity, I loved the fact that they help lots of different projects across the city. Quite often these projects are hard to reach and they may not find it easy to access the support they need. LoveBrum is exactly what is says on the tin – a charity which is Birmingham focused, because it loves the city, and works hard to make it a better place. Training for the half marathon was fun and there was great camaraderie amongst the team of runners. I wanted to continue being part of that team and help the charity. I signed up as a LoveBrum member (just £20 a month and you get access to a wide range of discounts through the loyalty card). A couple of months later, I became an Ambassador helping to raise the profile of the charity. When the opportunity to join the Causes Committee came up, I jumped at the chance.

As a member of the Causes Committee I get to find out more about projects that LoveBrum supports. I’ve been blown away by the incredible passion and commitment of the people who run these projects and the time they dedicate to making a difference to the lives of people in their communities. I want to help LoveBrum give a voice to these people and showcase the fantastic work that they do, as well ensure we can continue to support them by fundraising. Being part of the Causes Committee is very rewarding and it’s a privilege to work with the rest of the team.

What projects are you passionate about?

This is a really difficult question because there are so many worthy causes. It’s incredibly hard to decide which cause to vote for each month! I’m really interested in projects which work with and support the homeless community. People often find themselves sleeping rough through a combination of different issues (addiction, abuse, poverty) so projects that help tackles these issues are essential in reducing the number of homeless people.

As a mom to two teenagers, I’m acutely aware of the pressures they face. I’m passionate about projects which support children/teens, whether it’s breaking down the barriers surrounding mental health or helping them to build confidence and self-esteem. If we can help develop the next generation and role models in the community, this will hopefully cascade and reach even more people.