How We Helped Tackle Homelessness in 2017

How We Helped Tackle Homelessness in 2017

With homelessness in Birmingham becoming an ever-growing challenge, and 10,000 people thought to be sleeping rough in 2016 alone, LoveBrum called upon the people of Birmingham to make tackling homelessness their biggest campaign yet!

On the 10th October 2017, we kicked off World Homeless Day 2017 by raising £1,000 for projects supporting those living on the streets. LoveBrum asked fellow Brummies to get involved across social media and donated £1 for each ‘share’ their posts received. In just a few hours, LoveBrum reached their target and the people of Birmingham pulled together to show their support and desire to eradicate homelessness.

An amazing £500 of the money raised went to Tabor House run by Father Hudson’s Care. The incredible project opened in line with World Homeless Day and became Birmingham’s only permanent night shelter.

Homeless people often struggle to get on their feet, so Tabor house provides help with reading and writing skills, health checks, support in overcoming addiction, employability training and much more. The greatest part of Tabor House is that guests have somewhere to go at the end of their stay, a shower, food and warm clothes – no-one will be moved on or made homeless. 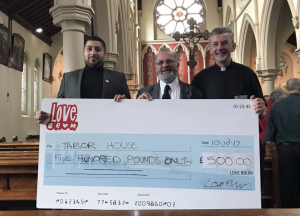 LoveBrum also donated £500 to Homeless Heroes, a soup kitchen, based in Digbeth, which provides a staggering 800 people each week with a hot meal and clothing.

The project relies on their diverse group of volunteers who pull together, no matter what the weather, to support Brummies in need. 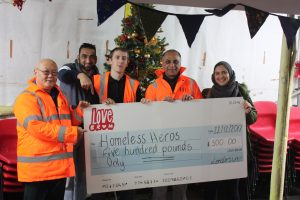 Christmas can be a particularly lonely time for those without a family or home to go to, so LoveBrum teamed up with The BPA, Wesleyan and the local charity, Serve Our Brummies, to spread Christmas cheer across Birmingham!

The people of our city demonstrated, once again, their incredible generosity and desire to tackle homelessness by donating much-needed items such as toiletries, food and warm clothing. Local businesses also got involved, donating even more to this great cause.

LoveBrum’s team of fantastic volunteers then set about the huge task of packing a whopping 500 bags, each with a personal message, to be donated at Let’s Feed Brum‘s Christmas dinner at Birmingham Cathedral on 16th December. 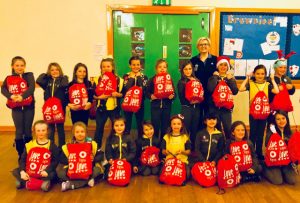 It was truly overwhelming to see the response from everyone across Birmingham – businesses big and small, people young and old, schools and youth groups, and even entire families! The support from everyone involved meant that 400 guests were fed a delicious Christmas dinner and picked up some much needed essentials – and a bit extra to continue sharing in the New Year.

If you’d like to get involved with any of these charities or want to join the LoveBrum community, get in touch at hello@lovebrum.org.uk.