A lifesaving Midlands charity which has been operating at full throttle for ten years is about to reach a key milestone in its journey. LoveBrum funded causes, Midland Freewheelers – the emergency rider voluntary service – is expected to clock-up its 10,000th job, carrying blood and essential medical samples and supplies around the region, this week (expected 20 March).

The landmark moment in its anniversary year, is a significant achievement for the service, which relies entirely on donations and voluntary activity to keep it on the road.

In the ten years since it was formed, Midland Freewheelers, has travelled approximately 200,000 miles – the equivalent of eight-times around the globe – taking emergency blood supplies, breast milk for premature babies, medical samples, records, medicines and equipment to hospitals, specialist centres and the region’s air ambulance.

The service is operated by 127 members, consisting of riders, drivers, co-ordinators and fundraisers, 24-hours-a-day, 365-days-a-year, whatever the weather. 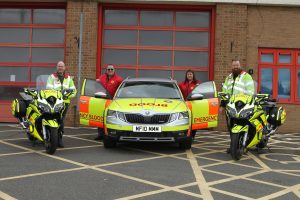 It costs between £35,000 and £40,000 a year to run the operation but is estimated to save the NHS in the West Midlands an estimated six figure sum annually in reduced transportation costs.

The group wants to highlight its achievement to raise much-needed funds and ensure the future of the service and encourage more volunteers to join them – either on the road, managing operations behind the scenes or undertaking fundraising activities.

The volunteers come from all walks of life and include experienced bikers and drivers and others who give their time but never take to the road. They include husband and wife teams, shift workers – some who already work for the emergency services – others have full-time jobs, own small businesses or are retired.

All riders and drivers are required to hold an advanced rider or driver qualification through IAM RoadSmart or ROSPA. Additional training is given to all members on our job allocation procedures, garage procedures and conduct.

The network of volunteers allows Midland Freewheelers to operate around the region – encompassing 11 hospitals, care homes, specialist services such as the Human Milk Bank at Birmingham’s Women’s Hospital and the West Midlands Air Ambulance. Its service also extends to other groups to relay packages across the whole of the UK.

Through co-operation with West Midlands Fire Service, the group is able to ‘station’ its liveried fleet of eight bikes, consisting of two BMW F800s and six Yamaha FJR bikes, together with 2 4×4 Skoda Octavia Estate cars used in bad weather and specialist runs, at fire stations in Birmingham and Wolverhampton.

Chris Mansley, Secretary of the Midland Freewheelers, said that the group’s roadmap was to make a difference, give something back to the community and relieve pressure on the NHS.

“Many of us are very grateful to the NHS for providing health services that have, in some cases, saved, or improved the quality of lives of people we know, be they family, friends or neighbours. Those of us who ride, get to do the thing we enjoy, but with a real sense of purpose. What we do helps our health services operate more effectively and saves money which can be spend on other running costs.”

Anyone interested in volunteering as a rider/driver co-ordinator or committee member should contact: Chris Mansley, Group Secretary on 0300 1024 999 or email: secretary@midlandfreewheelers.co.uk 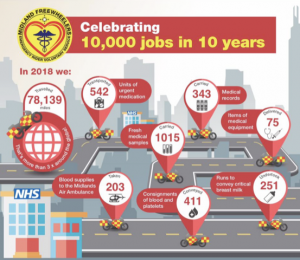